Now that we are familiar with the technologies, terminology and aircrack-ng suite, we can finally start cracking some Wi-Fi networks.

Our first task will be to create an access point called the “Evil Twin“. Many novice hackers are eager to crack Wi-Fi passwords to get free bandwidth (don’t worry, we’ll get to that), but there are many other much more powerful and interesting Wi-Fi hacks, not just a bit of bandwidth.

The Evil Twin access point is an access point that looks and acts like a legitimate AP, alluring users to connect to our access point. Aircrack-ng has a tool called airbase-ng, which can be used to convert our wireless adapter into an access point. This is a powerful hack on the client side, which will allow us to see all the traffic from the client and lead a man-in-the-middle attack.

What are we going to do?

In this scenario we are a private detective. We were asked by a customer to investigate whether his neighbor downloads and sells child pornography. Of course, we were asked to research and determine if it was true, and if so, to gather evidence.

First we need to check if our wireless network card is working.

As we can see, our wireless network card is operational and has been assigned wlan0. The next step is to place the wireless card in monitoring or promiscuous mode. We can do this simply by:

The next step is to start capturing traffic on our wireless network card. We do this by entering the following command:

We can see all the wireless access points in our area, along with all the necessary statistics. The neighbor in the viewfinder is on the AP with the “impulsnet” SSID.

If we do the right thing, we can clone his AP and make him connect to our evil twin. When he does this, we will be able to see all his traffic, but we will also be able to enter our own packages / messages / codes into his computer.

Step 3: We are waiting for the suspect to connect

We are now waiting for the suspect to connect to his access point. When this happens, it will appear at the bottom of the airodump-ng screen.

Step 4: How to create a new access point with the same SSID and MAC address

As soon as it is connected to the AP, we can use airbase-ng to create an evil twin of the access point. We can do this by opening a new terminal and writing:

if we encounter problems, we can simply use:

F8:98:B9:6E:BC represents BSSID, impulsnet is my SSID, and –c 11 is the channel of the suspect’s access point.

Step 5: Time to deauthenticate him

The next step is to “drive” him from his access point. The 802.11 standard has a special framework called deauthentication that, as you might expect, authenticates everyone on the access point. When the computer tries to authenticate, it will automatically reconnect to the most powerful AP with the “impulsnet” ESSID.

We can do this using aireplay-ng with the deauth package: 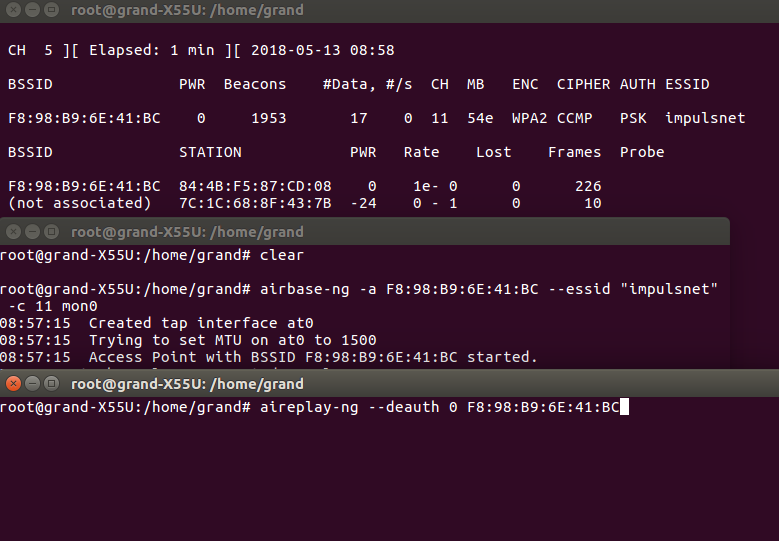 Note that I used his BSSID again in the aireplay-ng command. If our signal is stronger than his own AP, it will automatically reconnect to our evil twin.

The most important thing in an attack with an evil twin is to make sure that our fake AP is closer or stronger than the real AP. This could be a real obstacle when physical access is not available. In airports and other public places it is not a problem, but in our scenario, we do not have physical access and it is very likely that the victim’s AP is much closer and much stronger than ours. However, we do not let this to discourage us!

First, we can increase the power of our access point to try to make it stronger than its own. Even at a remote home, this can work because most access points automatically adjust their power to the minimum needed to maintain a connection with its clients. We can increase our AP to maximum power by typing:

This command will increase our signal strength by up to 27 dBm or 500 milliewats.

500 mw is the maximum power allowed in Central America, 1000mw in North America, and in Europe 100 mw, if I’m not mistaken. If you have other information you can leave us in a comment, because I might be wrong. I didn’t spend much time studying laws. 🙂

In some cases, increasing the power to 500 mW may prove inappropriate. If we try to maximize power to Alpha wireless adapters – 1,000 mW or 30 dBm – we may receive an error message (some of the newer adapters may actually transmit at 2,000 mW or four times).

Each country has its own Wi-Fi laws. Some allow more power and more channels than the US. For example, Bolivia allows the use of channel 12 and a total power of 1,000 mW. We can make our Alpha device use the Bolivian regulation by a simple typing:
iw reg set BO

Now that we are in the Bolivian regulatory field, we can increase our maximum power by introducing: 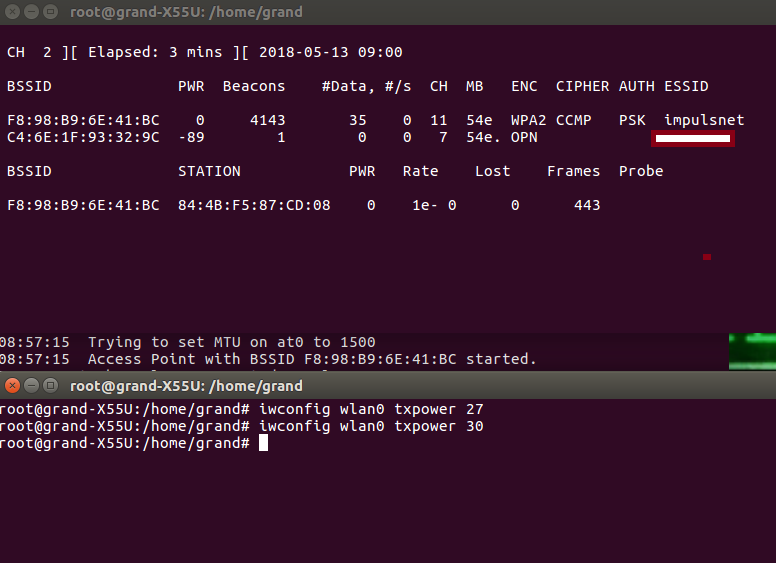 We check the power again by typing:

And now we can see at the end of the second line that our power is now up to 30 dBm or 1000 milliwatts, enough to overwhelm all other local access points.

We may have to install bridge utils because I don’t know if it is installed in BlackWeb OS. No big deal:


Now we need to provide internet access to the fake AP. This can be done in several ways. In this tutorial, we will consider that we have an x0 interface that has internet connectivity. Now, if you are connected to the wireless network, replace x0 with wlan1 or wlan0. A 3G modem will appear as ppp0. However, you need to know what interface the internet gives you and you can route internet access.

We will use the bridge control utility, brctl

The above command will make the connection. Now we will have to specify which of the two interfaces will be connected.

We can assign an IP to the interfaces and bring them above, using the command:

Of course, we also bring the evil interface above:

Finally, all configurations were completed. We can run ifconfig and see the results, which will show us all the interfaces we have created. Officially, the evil twin attack is complete. The client is now connected to our fake network and can use the internet quite easily. He won’t even have a way to find out what happened.

The Evil Twin is working

Now, when our suspicious neighbor is connected to the AP, we can use the following steps to “observe” his activities on the Internet.

We can use software like Ettercap to perform a man-in-the-middle attack. In this way, we can intercept, analyze and even inject traffic to this user. In other words, because it connected to our AP, we almost have full access to its data. If he actually downloads or sells child pornography, we can intercept him.

We should now be able to intercept emails and passwords in other applications and networks. We could even inject a meterpreter for additional access and control.

Be sure to come back as I update the new Wi-Fi hacking guide series. I will present more wireless hacks. If you have any questions, please leave a comment below, and we will try to help you.