Metasploit: How to embed a VNC server on a target system (#8)

How phishing kits are enabling a new legion of pro phishers

Metasploit: How to embed a VNC server on a target system (#8)

by BlackWeb-Security.org
in Hacking Guides, Metasploit
0

Hackers are often associated with everything related to clandestine and illegal activities, but this is not true. Hackers are increasingly sought after by national security in every country. In this guide, we will imagine a scenario in which a single hacker could save the world from destruction.

Imagine a dictator taking possession of nuclear weapons. He is beginning to threaten other nations with nuclear annihilation. We hackers could be the only ones able to save the world!


In this hack, we will incorporate a VNC server on the target system. VNC (virtual networking computer) will allow us to take complete control of the dictator’s system, with the Windows graphical interface that also appears on our computer. With this hack, we can do everything the dictator can do with his mouse and his interface.

It is important to note that the use of a VNC is not safe. If the user is on his system, he will see the mouse moving and the windows open, and finally he will realize what is happening. We should only use this hack when we are sure that the victim is not on his system. We will schedule our hack in the middle of the night, at the dictator’s location.

Let’s see how we could save the world from this belligerent tyrant!

Step 1: Incorporation of VNC on the dictator’s computer

First, we will start the only tool we need to save the world – Metasploit. In this hack, we will use a new exploit:

We will type the following command:

Next, we will have to choose a payload. Unlike previous hacks presented on Blackweb, this time we will use the VNC server. It allows us to use the victim’s Windows interface as if it were our own.

Before launching this hack, we just need to set the IP addresses of RHOST (the dictator’s or victim’s computer) and LHOST (our attack system).

Now that we have all the necessary information added to Metasploit, all we have to do is type the command:

As you can see from the screenshot below, Metasploit opened a Windows graphical interface, connected to our dictator’s computer, and gave us complete control! On top of that, we also have access to the Windows shell.

When we minimize the shell, we see what the madman is doing on the computer.


I’m sorry that the message is in Romanian, it was a joke on my first blog. 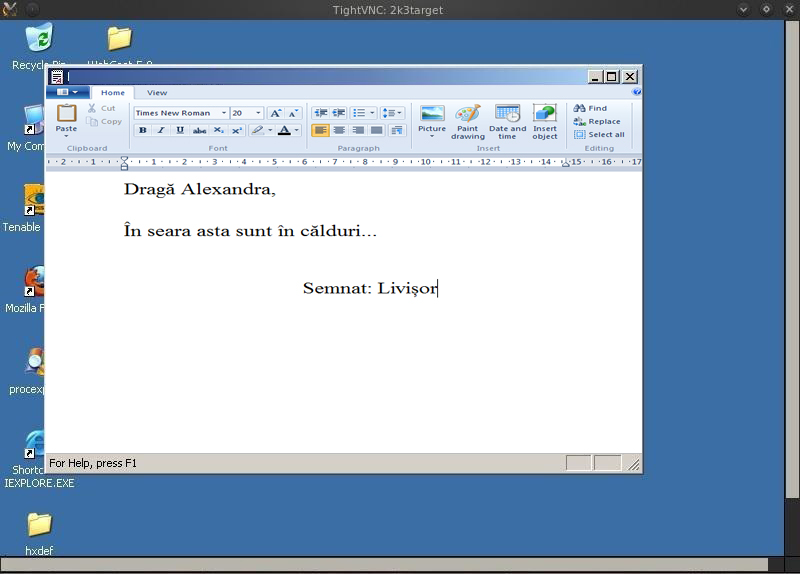 As we can see from the screenshot on his computer, he draws up the orders for launching his “nuclear attack”…

Hmmm, maybe we can deactivate the rocket launcher.

Let’s take a look at its running processes. We can click on Control Panel -> Administrative Tools -> Services and we will see what services it has run on its computer.

As we can see from Services, he has a task called “Launch Nuclear Attack” on his computer and it started. If we can stop or disable this service, we can stop it before launching the attack! We click on the “Stop” link and stop this task.

We just saved the world!

Maybe the world is safe for the moment, but most likely they will realize why the rocket launch did not activate, but we did what we could, and we will live to fight another day.

That’s about it with this tutorial. Don’t forget to come back for more guides. If you have any questions, the comments section is at your disposal.